To my astonishment and enormous delight, several people have enjoyed “Mrs Lillicrop Investigates” and it is possible the story will see the light of publication in the not to distant future. More later.

It has inspired me to write another tale about my lady occult detective. It is very much work in progress, but the working title is “Mrs Lillicrop Goes to Scotland.” The cast of characters so far includes a handsome laird, a nervous wife, a difficult mother-in-law and batty sister-in-law in need of a good slap, several manifestations of a disruptive nature and a very drafty castle. Add over cooked venison, under cooked mutton, porridge, lashing of single malt and some shortbread and all the components of the occult are present.

Why Scotland I hear you cry…okay I don’t, but bear with me I’m in composition mode and its hard to turn it off. Two reasons…first,  my BFF has just up sticks from Kent and the roar of planes overhead for the tranquil beauties of Argyll and sea loch views. She tells me she is still getting used to the lack of noise, except for when the dog considers it is his duty to bark at all passing boats in case they are carrying invaders.

And second, because I fell in love with the Highlands when we visited a few years ago and I wanted to set a story there. And this is in spite of nearly being killed by a gentleman who’d had a liquid breakfast and decided to sleep it off while driving along the A96 straight at me. We left our written off car at a garage by Culloden, which some how seemed appropriate.

Even this excitement didn’t put me off and I really wanted to write something set in this beautiful land, but until now, nothing came to mind. I admit that Fara in “The Lord of the Farans Hills” is a thinly disguised Scotland, but it isn’t the real thing.

Its not just the beauties of the Scots scenery which calls to me, it is tradition and one particular tradition more than any other. More years ago than I like to remember, I married a military historian and got corrupted by The British Army. I was a little corrupted already, having been seduced by Regency Romances into reading up on the Peninsula War and falling for such characters as Johnny Kincaid, Sir John Moore and Harry Smith…there will now be a brief pause while I and the previously mentioned military historian who is reading this over my shoulder have our usual fight over what he has the audacity to call “a bunch of cocky little bastards in green jackets” and I call my beloved Rifle Brigade…hang on, there maybe hitting.

Back to Scotland…you can guess where I’m going, all those glorious regiments with their wonderful names…The Black Watch, The Gordons, The Cameronians etc etc.

Someone once asked me if I was going into battle (please god it never happens, read military history, it will make you a pacifist faster than anything else) who would I want surrounding me. Membership of my army has changed over the years, but one choice always remains, I want Highlanders in front.

Who goes on the right and left flank…go for it Macaulay!

A Ramnian proud was he:

“Lo, I will stand at thy right hand,

And out spake strong Herminius,—

Of Titian blood was he:

“I will abide on thy left side,

I’d apologise for that if I had any restraint or a grain of conscience.

So who will be on the flanks or even bringing up the rear? My adored Rifles, any regiment of Sikhs or Gurkhas you care to name and the Brigade of Guards…all of them, we aren’t doing this by halves. With a Highland regiment advancing, pipes sounding, I think there would be a good chance of surviving the day.

The Highlands, the mountains and the lochs, the forests and the heather, it is one of the most beautiful places on Earth and if you have never seen it, you should. Robert Burns said “My heart’s in the Highlands, my heart is not here,” and English as I am through and through, I think he might have been right.

I have just sent my occult detective short story off to the editor and his first comment was on the part food plays in it. Lovely John Linwood Grant made the same comment about my other short stories in an interview I did with him recently, only he mentioned the other F word…fertility, more of that at a later date.

It got me thinking, because food does play an important part in my stories. I think what a character cooks and eats is important to understanding them and can give you as much insight as what they wear, where they live and what they believe. Chances are if they don’t eat pork, they are from one of the Faiths of the Book which forbid it, or if they don’t eat beef, they maybe Hindu. If they don’t eat meat at all, they maybe vegetarian or vegan, either by conviction or faith again.

Some of us are heathens with the moral values of a vulture and eat almost anything…I’m not judging, I’m just saying, cos I suspect I may have to put my hand up and be counted in this group.

Maybe this is the moment to mention my favourite food apart from bread and butter, because I don’t get to eat it very often and if you just happen to have a tin which needs a home, I would like you to consider me first. 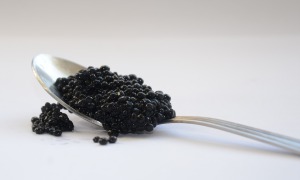 Yes, I love caviar. I don’t need your blinis or your soured cream or your chopped egg, just give me a spoon.

I digress… back to food in stories and the insight they give to character. For example, if an individual breakfasts on raw chicken gizzards with a side order of hot caramel sauce, the chances are they are either the villain or not playing with a full deck.

I couldn’t find a picture of raw chicken gizzards, so here is one of tentacles. I would most certainly eat this, but not with a side order of hot caramel sauce. 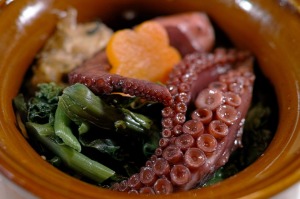 On the other hand, Mrs Lillicrop, my occult detective breakfasts on porridge and kippers and has a fondness for afternoon tea. Already you are getting the picture of middle class respectability and you would be right, apart from a tendency to attack poltergeists with nothing more than a pince-nez and a stern word of reproach.

I sometimes visit a site where young authors ask for advice, often it has to do with what name would be best for their characters and what hair colour to pick etc etc. I think it would be a far better if they first worked out what their creation likes for lunch…see previous about breakfasting…a tuna sandwich with no mayo says more than sea green eyes and dirty blond hair imo. I’ve not suggested any of this to them, because they would probably regard it as grossly frivolous.

As you probably know, or have guessed, I like to cook and I like to cook things I have never cooked before, especially if I can use ingredients I haven’t tried. I also like to read about cooking down the ages, because the evolution of food and cooking technics reflects the evolution of mankind. It is part of our history, all of us, no matter where we come from, how we eat and how we cook it is the result of thousands and thousands of years of experiment and enjoyment. Tastes differ all over the planet, but very few of us eat what we don’t like, although plenty of us eat too much of what we do like, and yes, I’m guilty of this…warm crispy bread and lashing of fresh butter…mmm.

What people don’t like to eat can tell you more, Mrs Lillicrop is off to Scotland in my next (work in progress) story, but she will not be eating haggis. Why? Because I hate it, can’t stand it, its up there with cabbage and beets, my other two top hates. I will now sit back and await the comments of haggis lovers, including no doubt my husband who adores it and has to cook it himself if he wants to eat it. He is lucky I don’t make him do it in a fire pit in the garden. He likes cabbage as well, I sometime wonder why I married him.

However, what those around Mrs Lillicrop do eat on her Scottish adventure and what they don’t eat will provide much to explain them and their thoughts, tastes and motivations.

BTW, he doesn’t like lobster either, I have to eat his share for him, it’s so hard, but someone has to do it.

On Amazon and KU